...well, really, one giant misconception, and all the nonsense that stems from it.

This is the part where the internet marketers would tell me to sell you my system.

And frankly, given your psychological state right this moment and how convincing my copywriter is, you’d probably buy it.

We’re not very comfortable with voids, it’s an evolutionary thing.

But I’m not going to sell you anything.

Seriously. You’re going to get to the end of this site, and then I’ll invite you to join an email list where we’ll keep talking about this stuff, and eventually, I’ll sell you something there.

But the whole point of this site isn’t to act as some giant, elaborate mousetrap for your attention.

That kind of approach is very common. It is also predicated on an adversarial relationship between me and you, and on that big misconception about you being flawed.

So we’re not going to do that.

What we ARE going to do for the rest of this site is talk about what you DO need to build a business that feels like an elegant, seamless, and joyful extension of your self.

Now, here’s the one big, giant disclaimer: this is work I typically do over a period of months with my systems build clients.

You can make an excellent, deeply useful start on it here. But this is not the end all and be all. And it is certainly not an invitation for interjection. Consider this a jumping off point, not an end point. The ground is soft, if you’re willing to dig.

So, as we’ve talked about so far, business advice is useless because advice isn’t what you need.

What you actually need is a deep understanding of yourself, and how you work best.

And I’m not just talking about the surface-level stuff.

(Which, as I write this, it occurs to me that for me, surface-level stuff is deeply intellectually rigorous things like the MBTI, the Strengths Finder assessment, etc. Not exactly a Buzzfeed quiz.)

And sure, all those things are good to know. But they’re your basic specs.

Your personality, the time of day you do your best work, your talents and preferences, are absolutely important. But if you’ve read this far down this site, chances are you’ve already done all that stuff.

So I’m going to go immediately into your nervous system.

So, to massively overgeneralize, you can divide your nervous system into two main “operating systems”.

(And yes, I know the gut microbiome also plays a huge role in this via the gut-brain-skin axis, but for now, let’s keep it Kindergarten-level and pretend this all just happens in the brain.)

Verrrry roughly speaking, we’ve got the amygdala, and the pre-frontal cortex.

Amygdala = emotions, reflexes, things that have been embedded in your nervous system due to evolutionary biology or trauma

Pre-frontal cortex = logic, higher decision-making, all that kind of stuff.

One really great analogy that Chip and Dan Heath use for these two systems is that of the Elephant and the Rider.

The Elephant, your amygdalas, are technically stronger. If they kick off, the pre-frontal cortex goes offline (to mix metaphors), and you’re going to react. Can’t do anything about it, it’s a biological thing.

(This might sound kind of heady and like a far-out tangent, but we’re coming right back to business, promise.)

You have to have a solid understanding of your Elephant and Rider to know what you need and how you work best, because if you don’t, you’re going to end up doing things assuming that the Rider is running the show, when in fact you might be more at the mercy of the Elephant in your day-to-day work simply because you haven’t paid attention long enough to figure out what your body needs to be OK.

Let me tie back into a business setting.

If you are not aware of what your body, mind, and emotions need to be OK from moment to moment, then your moment to moment experience is going to be influenced by forces you’re unaware of and don’t understand.

And this leaves you vulnerable.

First, you’re going to feel like shit, because you’ll be riding hormonal waves you don’t understand.

And third, you’re going to be vulnerable to the sales and manipulation tactics of people who desperately want to tell you what to do, and get their own way.

Example 1: Let’s say everyone around you says you need to be on social media. That’s what business owners do, right? And if you don’t, then what might happen? You might lose your business! People won’t know about you! People won’t listen to you! You’ll be living in a box by the month’s end! You’d better “just do” social media. (Whether it’s actually a fit for you or not.) <— All these things sound exaggerated, and you might not consciously think them that way, but this is the underlying narrative.

Example 2: Let’s say you have a client who always makes you feel like you have to be on your toes with them. You don’t want to actually be that available, but they make you feel like you’re a bad business owner for having boundaries, and your time and worth become a part of your negotiation with them.

I don’t want your self, time, worth, goodness, or safety to ever be something that comes up for negotiation in business.

And when you have an understanding of your nervous system and can (1) be with what is and (2) step back into non-judgment and awareness around that, they never even get put on the table to begin with. The Rider stays in charge, you remain intact. 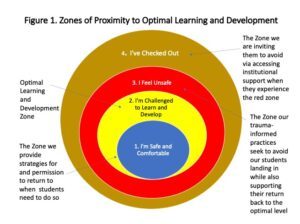 Flow reliably happens at a specific intersection of skill level and challenge level.

We’ve focused on the nervous system in a relatively negative, “prevent issues” way.

Now let’s talk about that most sought-after of states, flow.

Flow has taken on a sort of mythical status among entrepreneurs (especially cis-male entrepreneurs, they tend to get super excited about it.) But the truth is, flow is simple.

You don’t have to meditate on a mountain for five years, cut out caffeine, or life-hack yourself to death to get into flow.

But when you hit that sweet spot between skill level and challenge level, everything feels amazing.

(In fact, my copywriter reports that she’s been in a state of flow the entire time she’s been writing this, because it is challenging, and she is exceptionally skilled. Perfect match.)

You can hit the same thing in your business, but only if you know enough about yourself and your nervous system to put yourself in the ballpark of that intersection. Which goes right back to this whole issue of trying to build a business from a void, a problem, or a myth.

You have to know yourself, what makes you feel great, and be honest about your skill and challenge level, and then, rather than getting into this mythical “OMG I have to work so hard for it” or worse, “Ahh, I need to take FLEB Entrepreneur Barbie’s course on it!”, flow becomes, frankly, a piece of cake.

The whole point here is to figure out how to hack your own nervous system.

Because ultimately, it’s the one calling the shots. Your body wants you to survive, and it will relentlessly and enthusiastically get rid of anything that feels like a threat.

And no, I will not give you a 27-part exercise to complete to figure this out. Take your interjection and begone 🙂

And see what you can do to start creating those parameters for yourself.

Because once you get that in place … ohhhhh that’s when we get to do the really fun stuff.

We’ve created a massive intellectual void by dismantling the core false belief of the online business world — that you are flawed. Now it’s time to fill in that void with a new belief, and information about how you work.

You’re a meat computer. You have to learn how to hack your own nervous system, or someone else will.

The two main elements you need to know about are the amygdala (Elephant) and pre-frontal cortex (Rider). The Elephant is technically stronger, but the Rider is smarter. Understand their dynamic, or risk feeling like shit all the time and constantly fighting for your value and humanity.

The other thing to think about here is flow. People make flow into a mythical thing. It is not. It reliably happens at a specific intersection of skill level and challenge.

It’s all an experiment. You don’t need someone else to tell you this stuff. You’ve got this.

We use cookies on our website to give you the most relevant experience by remembering your preferences and repeat visits. By clicking “Accept”, you consent to the use of ALL the cookies.
Cookie settingsACCEPT
Manage consent